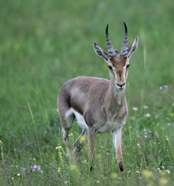 Range and Population Formerly occurred across most of the Arabian Peninsula, north to southern Syria and extending westwards into Sinai. The last confirmed records for Egypt were in 1932 though there have been some recent unconfirmed reports (Saleh 2001). There have been no records in Syria since the 1970s, except for an unconfirmed report in 1994 (Kingswood et al. 2001). In Lebanon, the species was believed to have become extinct after 1945, but three were seen in 1998 (Kingswood and Khairallah 2001). Last seen in Jordan in 1987 (CAMP 2003).

Current range: Israel (widely distributed); Saudi Arabia (occurs on the Farasan islands, in three protected areas, and as scattered populations in the west); Oman (widely distributed, with the largest population in the Arabian Oryx Sanctuary); United Arab Emirates (only known around Jebel Ali area but the provenance and identity of some of these gazelles is uncertain and they may include hybrid or non-native taxa that have escaped or been released from private collections)

; Yemen (once widely distributed but has declined due to hunting; most rece nt reports are from the mountains of western Yemen but there is no recent survey information available).

Threats Illegal hunting for meat and live capture for pet s and private collections. Habitat loss through conversion to agriculture and develo

Conservation Measures Legally protected in Israel, Saudi Arabia, and Oman, but enforcement is not always effective. Occurs in the following protected areas: